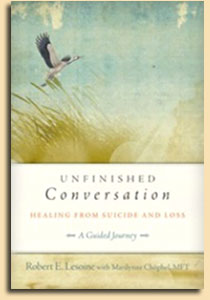 Suicide is becoming an increasingly endemic problem arising from the suffering of our modern world – from increasing isolation and alienation of our technological age, to the challenges of veterans returning from combat, to the devastating personal impact of the global financial crisis, and the prevalence of self-medicating to cope with pain.

From the American Association of Suicidology (AAS):

It is estimated that for every suicide there are at least 6 survivors, with approximately 5.4 million Americans who became survivors of suicide in the last 25 years.

In 2010 (the latest year for which we have national statistics from the Centers for Disease Control), there were 38,364 suicides in the U.S. More people died from suicide that year, than from car accidents. An estimated 105.1 suicides per day, with someone dying by suicide every 13.7 minutes.

There was one elderly suicide every 90 minutes, with about 16 elderly suicides each day among those 65 and older. The rate of suicides for the elderly for 2010 was 14.89 per 100,000.  Elderly white men were at the highest risk with a rate of approximately 29.0 suicides per 100,000 each year.  White men over the age of 85, who are labeled “old-old”, were at the greatest risk of all age-gender-race groups.

“The road of the suicide bereaved is often an unknown rocky journey… the road of suicide grief is often unknown because of the stigma, the fear of talking about it… But it doesn’t have to be that way… I encourage you to contact us if you need anything, to use the resources available on the AAS web site, and continue along your road because it does get less rocky. There is hope along the way. You will find it again even though in the present moment you might not realize it’s there. Know that there are many of us not just in the United States but around the world who are working to help you, to ease the pain of that road. And we are walking with you.”
~ Michelle Linn-Gust, Ph.D. AAS President-Elect

From the American Foundation for the Prevention of Suicide (AFSP):

Suicide is a public health issue that does not discriminate by age, gender, ethnicity, or socio-economic status, and it takes an enormous toll on family, friends, co-workers, and the entire community.

Worldwide, already in this new century there have been more than 5 million suicide deaths worldwide. Each year approximately one million people in the world die by suicide. This toll is higher than the total number of world deaths each year from war and homicide combined. In the last 45 years, suicide rates have increased by 60 percent in some countries.

Suicide accounted for 12 deaths for every 100,000 people in the United States, making it the country’s 10th leading cause of death. Unlike many other leading causes of death, suicide continues to claim more lives each year.

In 2010, the highest suicide rate (18.6) was among people 45 to 64 years old. The second highest rate (17.6) occurred in those 85 years and older. Younger groups have had consistently lower suicide rates than middle-aged and older adults, but suicide was the third leading cause of death for 15-24 year olds. In 2010, adolescents and young adults aged 15 to 24 had a suicide rate of 10.5, and rates of suicide are highest for older youth (13.6.)

In 2010, the highest U.S. suicide rate (14.1) was among Whites and the second highest rate (11.0) was among American Indians and Alaskan Natives (Figure 5). Much lower and roughly similar rates were found among Asians and Pacific Islanders (6.2), Blacks (5.1) and Hispanics (5.9).

Uncovering the reason for an individual suicide death is complex and challenging. What we know from research is that 90% of people who die by suicide have a potentially treatable mental disorder at the time of their death—a disorder that often has gone unrecognized and untreated.

Among people who die by suicide, depression is more common than any other mental disorder. Research has shown that certain symptoms in the context of depression raise the risk of suicide. These include intense anxiety, panic attacks, desperation, hopelessness, feeling that one is a burden, loss of interest and pleasure, and delusional thinking.

Suicide is an important public health problem in many countries, and is a leading cause of death amongst teenagers and young adults. Worldwide, suicide ranks among the three leading causes of death among those aged 15-44 years. Suicide rates among young people have been increasing and they are currently the group at highest risk in one third of all countries, developed and developing.